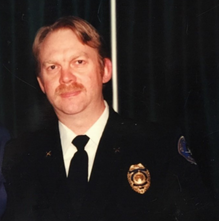 "​I started as a Fire Explorer myself in 1976, with King County Fire District #2, Burien FD.  My family has been involved in the Fire Department since 1947: my Dad was one of the original members of KCFD #24 Angle lake FD, and my brother joined in 1976.

I became a volunteer firefighter with Angle Lake in 1979.  Soon after, the Explorer Post in Burien (Post-911) folded up, allowing me to start Post #24 at Angle Lake with the help of the Chiefs and other members in 1980.  I have been a career firefighter since 1981, working myself up to the current rank of Division Chief in Emergency Management with the now Puget Sound Regional Fire Authority.  SeaTac Explorer Post #24 is the oldest active Fire Program in the Country to our knowledge, and is now consolidated with three other departments to form the Zone 3 Fire Explorers, which as of February 1, 2020, is now the Zone 3 Fire Cadets.  The other departments which consolidated with SeaTac Post 24 are Post 51-Tukwila Fire Department, Post 14-Renton Regional Fire Authority and Post 81-Maple Valley Fire and Life Safety, which is now known as Puget Sound Regional Fire Authority ,  To further build up interested youth in an educational setting, The Puget Sound Skill Center Fire & Emergency services program was developed in 2004 and continues with support and sponsorship from the Zone 3 Fire Cadets Post 24.

The rewards or incentives that keep me involved and motivated is to see the young folks that enter the program at the age of 14-15 years old, and then leave at 19-20 with confidence, motivation, maturity and a plan for the future that they did not have when they joined our program.  In addition is the life-long relationships, the life skills, and good moral character that is developed.

If you are at all interested in Fire or Emergency services, aspire to belong to a quality group of young men and women that provide excellent community services and support the local Fire Departments in the area, or hope to attain life skills and positive relationships, you should look into our programs".
​The Zone 3 Fire Cadets would like to thank our Sponsors and other
​Supporting Agencies for their continued Partnerships and Support.
​
​
"THANK YOU"​
↑ Click on the logos for their websites ↑